George has trained in Lung Ying since 1994, having started his training with Sifu Ronayne Loderus in the Sydney seaside suburb of Avalon. He started his martial arts journey at the tender age of 9, taking Judo classes, and spent a year training Ninjutsu. At the age of 15, George joined a local Hapkido and Tae Kwon Do school, training 6 nights a week for over 3yrs until the school eventually closed down.

Keen to develop his martial arts, especially his striking skills, it wasn't long before George began training in Kali under famed Kali master Raymond Floro in Sydney. Whilst training Kali, George made an enquiry at a local Kung fu club closer to home.

"Martial arts was the only thing I was interested in, so I was always keen to train with great people."

George spoke with the school's Sifu and was told he had to wait two and a half months before the next student intake.

"I was shocked that a little martial arts school would have intakes, especially as there were only 4 intakes a year. I had no choice but to wait." 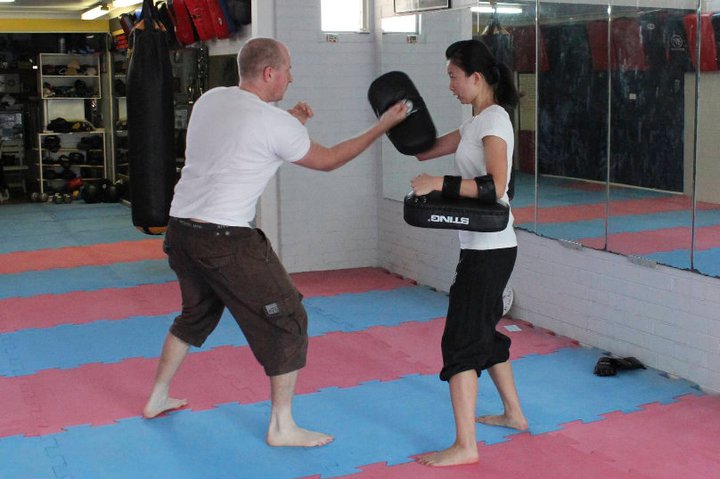 Once George began at the school, he was in awe of the students skills.

"The adult students were excellent, but I will never forget two boys there that were 5 years younger than I was, and a real hand full when we sparred. I remember thinking how cool it was that 13 year olds could bring it against an 18 year old. I also remember thinking, I've got to learn what these kids have been taught."

The Kung fu school was Avalon Southern Dragon Style Kung fu. The Sifu was Ronayne Loderus, who was a Dragon Style student of Sifu Yip Wing Hong (New York), and continued his training with Master Chan in Australia.

"I started training at the Kung fu club in March 1994, and began the most intensive training I had ever done. I was highly motivated to develop the skills shown by the students at the school. I trained everyday without fail."

"We often had visiting teachers come to the school to teach us. People like Sun Da Fa (Hsing Yi, Baji, Qi gong master), Anthony Langley (multiple times Australian BJJ champion), and Ivar Hafskjold (Stav master) from the UK came several times to teach us. 'We had been training MMA before there was a title for it.' We also visited the Dragon school in Cabramatta at least once a year to train and help with the new year lion dancing."

"I learnt as much as I could have from Sifu Loderus before he moved back to the USA. Once he left, myself and other senior students continued to run the school in Avalon. Sifu Loderus would come back 2 to 3 times a year to continue teaching us, and we continued to work on refining our skills."

George has travelled to visit and train with Dragon schools in New York and Hong Kong. He is also a practitioner of the rare internal style of Baji, having trained for over 11yrs with one of China's top sifus, Master Sun Da Fa.

"I find the Baji training has complemented my continued practice and study of Southern Dragon Style. The basics work on similar principles, and the partner exercises can be done in the "Dragon shape". As Dragon incorporates many techniques to unbalance an opponent, the Chin-na training is an extension of this principle."

"Meeting people who share the same passion in martial arts has been one of the best things about all the training. Working out and sharing training tips with our brothers and sisters of the art, forms lasting bonds and friendships.'