Lung Ying, aka Dragon Style, is classified as a southern kung fu Hakka style, tracing its history back to an Abbott called Dai Yuk Sim Si who lived during 19th Century China.

Dai Yuk Sim Si was the head abbot at Wah So Toi temple on Mount Luo Fuo Shan, Guangdong Province, and passed down the art to Grandmaster Lam Yiu Gwai.

Lam Yiu Gwai is accredited as the Sijo (founder) of Dragon Style because he was the first person to widely spread it to the public. As a youth in the late 1800s, Lam Yiu Gwai grew up in a kung fu family learning a Hakka village style called Lam Gar Kuen from his father Lam Yuen, who also studied at Wah So Toi. After having established his own school at the age of 16, Lam Yiu Gwai started teaching around Bolou county near Wai Chow, where he met students of Dai Yuk Sim Si. Subsequently, he began training at Wai So Toi for a number of years and eventually integrated all he had learned into the Dragon Style we know and practice today.

Lam Yiu Kwai passed away in HK in 1965 at the age of 91. He had thousands of students during his teaching career, the last and youngest being Chan Cheung (Robert Chan) of Sydney, Australia. Master Chan taught in HK for over 25yrs before relocating to Australia in 1988, bringing with him Dragon Style Kung Fu and establishing the Dragon Style Kung Fu Fitness and Therapy Centre in Cabramatta. He retired in 2003 after serving his local community for 15yrs as an acupuncturist and herbalist in Traditional Chinese Medicine, and sadly passed away in October 2010 aged 81.

Lung Ying is characterised by its hand movements, waist power and slide stepping. Few kicks are employed in the style, as it is a close range southern combat system, which uses all parts of the arms and hands to defend against an attacker. All kicks are below chest level and are used as stomping kicks, snap kicks, and trips to attack the lower limbs of an opponent. The hand movements comprises of jabs, grabs, open palm strikes, punches, elbows, and also makes use of the forearms. Each technique has one or more principles of Tun To Fau Chum (Swallow Spit Float Sink). Techniques are circular, and attacking is highly aggressive and frustrating for an opponent, where they are relentlessly pressed and checked until defeated. Stances include the forward stance, bow and arrow, cat stance, and horse stance. It is he foundation of one’s training where the ability to move fluidly like a dragon begins. Training at Dragon Style Kung Fu Australia is focused more on the concept and theories of movement and transitions, rather than set ideas of applications of techniques. Dragon style is still a traditional self defence system, and all practitioners strive to follow the teachings of the founder: 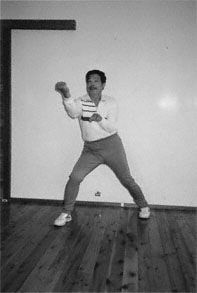